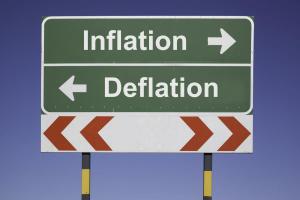 Many mortgage customers have been left in limbo this month, as the UK rate of inflation has dropped below 0%.

Whilst this is good news for consumers able to take advantage of the falling price of oil at the nation’s petrol forecourts, there is a worry for those with bigger commitments.

With previous uncertainty around the General Election, many borrowers were lapping up some historic low rates on offer, but there is now uncertainty over where rates will go from here.

“Deflation is considered at face value to be good for those with mortgage debt” says Taj Kang, Business Development Director at Contractor Mortgages Made Easy. “It suggests that rate increases are further away than ever, given that generally the Bank of England uses the Base Rate to control inflation.”

“The flip side, however, is that in a period of deflation, whilst rates are seen to be as low as they can go; in ‘real terms’ with the cost of living continuing to stagnate, many will see their mortgage commitments as a larger percentage of net income, and will therefore be unlikely to be able to overpay or save as much.”

“Consumers would certainly celebrate in the short-term if there is a period of prices falling. But there are concerns that if prices keep falling, this could lead to a prolonged period of economic stagnation” adds Taj.

“Deflation poses a danger to the economy as many consumers are tempted to delay making any significant purchases, as they assume or hope that prices will be even cheaper in the coming months.”

There are however, some reasons to be cheerful about a period of deflation.

The average cost of fuel continues to reduce, and the latest supermarket fuel price war will only push prices lower. Wage increases continue to rise, now above 2%. There is, however one final warning, according to David Kern, chief economist at the British Chambers of Commerce.

“The quarterly fall in unemployment was the smallest since the summer of 2013 and the youth unemployment rate is still almost three times as high as the national average,” he said. “It would therefore be premature for the broad positivity in the latest jobs figures to lead to an early increase in interest rates. Businesses need a continued period of stability in order to deliver the growth and prosperity that we want to see.”